towards posterosuperior aspect of the ear canal.

Earwax: Endoscopic View Before & After Syringing The typical appearance of an adequately     The appearance after syringing done.

to cotton tip injury used by patient to self Earwax Removal Without Prior Softening With Otic Drops This technique is usually performed for small to moderate amount of earwax impaction in whom who needs quicker relief of ear blockage and hearing loss.  However, near complete occlusion is also feasible to be removed.  Gentle manipulation with cold instruments and suctioning under good microscopic view are required.  If it becomes intolerable and difficulty encountered, the procedure should be deferred to another date.  Adequate earwax softening solution prescribed.  Complications include ear canal  abrasion, laceration, bruise, tympanic membrane injury and secondary infection. Superficial haematoma complicating removal of hard earwax.  However, this is self-limiting and will resolve completely. Earwax smearing onto eardrum surface.    Rippling/wavy epithelial surface of the Presence on avulsed hair in osseous meatus or on eardrum surface. Dry earwax flakes in osseous meatus with some sticking onto eardrum surface. Similar dry flakes in another patient close to the eardrum. 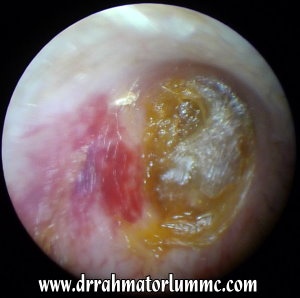 Probable ear digging injury site with delayed healing ending with exposure of the bone underneath.